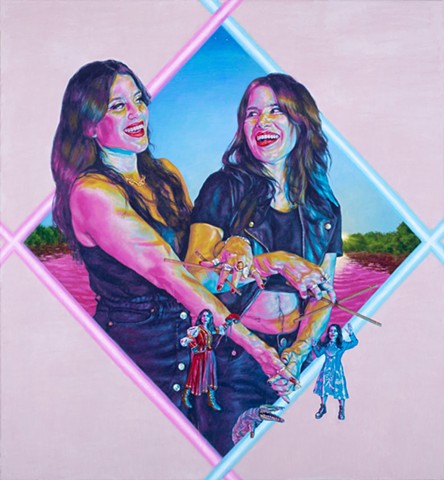 My portrait of Georgia and Melissa Laurie, created for my Episode 1 of Extraordinary Portraits aired on BBC One, 6:30pm on the 27th February where my extraordinary subject, and my painting of them, was revealed..... It has been a great pleasure to be part of this and to paint my subjects, twins Melissa and Georgia Laurie who were involved in a near-fatal crocodile attack in Mexico last year. I was so fortunate to be asked to paint them and their working with me after everything they've been through involved such trust on the part of Melissa and Georgia and I want to thank them with my heart. It was a privilege and they are an inspiration in the way they've shown such courage in overcoming an immense challenge and determination to re-shape their story. When I met Melissa and Georgia I was quite overwhelmed by the horror of their ordeal, no doubt similarly to all who hear of it. It seemed to be like some kind of baroque lurid fever dream and I wanted to use colour that suggested this and also the bioluminescent waters of the fateful lagoon. Using heavily saturated neon gives my subjects a hyper vivid quality which along with an over life size scale gives them a kind of heroic intensity, which they both surely deserve. When devising the composition two key things had struck me when we met; that the twins were having to constantly re-tell their story and that they were using humour as a way to make it bearable to tell it. This drew me to re-read Marina Warner's 'No Go The Bogeyman', in which she explores how "songs, stories, images and films about frightening monsters have always been invented to allay the very terrors that our sleep of reason conjures up." She writes of how" humour has been used effectively to heal", and how "ogres lose their bite when they are shown up as blundering fools.". In my portrait Melissa and Georgia have absolute mastery over the telling of their stories, and this rudimentary glove puppet crocodile is no match for the sophistication of their puppetry in what is no mundane Punch & Judy show. "Humour," writes Warner, "is clearly one of the chief and most successful ways in which popular culture resists fear. Freud distinguished jokes from humour, commenting 'Humour is not resigned; it is rebellious. It signifies not only the triumph of the ego, but also of the pleasure principle, which is able to assert itself against the unkindness of real circumstances' ". Created for the BBC Arts & Chatterbox Media series Extraordinary Portraits. Roxana Halls' was featured artist for episode 1 and the show was first broadcast on the 27th February at 6:20pm on BBC One & repeated on the 28th at 11:10pm.

Limited Edition Prints are available of the painting on this website