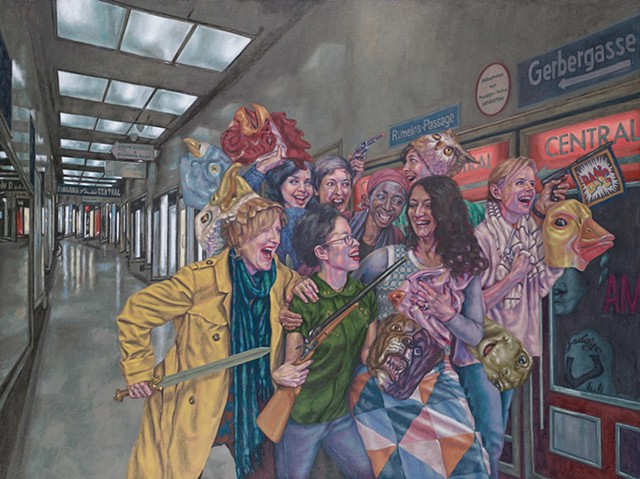 Roxana Halls’ Laughing While Marauding, 2020 (oil on linen, 90 X 120 cm) captures the rebellious spirit of collaboration and collusion which marks InFems’s inaugural exhibition Biting Back And Enjoying The Taste. The painting belongs to one of Halls’ most renowned series, ‘Laughing While…’ (2012 onwards) in which she referenced the writings of French feminist philosopher Hélène Cixous, particularly Cixous’s essay ‘Castration or Decapitation?’ (University of Chicago Press, 1981), claiming ‘for me écriture féminine is most alluring as an enduring provocation.’ These acts of provocation might appear as commonplace as laughing, eating, talking, and so on, but the point is that even such actions can become subversive when they are censured or performed in “inappropriate” contexts. In Laughing While Marauding the models were once Halls’ students, one of her first groups in fact, to whom she has remained close over the years. It’s a bittersweet painting for her as the central figure of a black woman, Michelle, has since died of breast cancer. Halls describes the scene as ‘a kind of Bauhaus/Dadaist hen party,’ this description in itself a neat collision of popular culture and fine art. Unlike many art schools at the time, the experimental Bauhaus welcomed women from its inception in 1919. And even if the cohort remained mostly (three-quarters) male, and Walter Gropius, one of its directors, expressed the belief that women were only able to think in two dimensions rather than three, women thrived there, as is evidenced by the successes of Marianne Brandt, Anni Albers, Gunta Stölzl, and others. Under the direction of Oskar Schlemmer, the theatre workshop at the Bauhaus was where students from painting, sculpture, textiles etc. came together to collaborate on productions. It also had the role of organising the school’s parties and when the Bauhaus was based in the industrial and conservative town of Weimar, local inhabitants were shocked by the antics of these bohemian students. Photos give a hint of the innovative costumes. The 1929 Metal Party: guests wearing tin foil clothes and spoons. Similarly, Dada was renowned for the puppets of textile artist Sophie Taeuber-Arp, for its now legendary 1916 event at the Cabaret Voltaire in Zurich where Hugo Ball was carried on stage because blue cardboard tubes restricted his legs and torso and a red-lined gold cardboard cape his upper body. Halls has a longstanding interest in theatre and cabaret (her studio occupies the saloon bar of a former 1930s London theatre, now a Bingo Hall) and she works from photographs, her models abetting the creation of scenarios that lend themselves to multiple narratives. In the last thirty years or so, traditional hen parties have also involved outlandish costumes, but there’s a residual snobbery about this rite-of-passage. However hard the hen party tries to re-invent itself, it cannot quite shake its reputation. And why should it? Even in its most traditional, heterosexual context, there is something liberating about the rituals of tables turned, male strippers, drunk brides-in-waiting sporting ‘L’ (learner) plates and pink tutus, spilling out of one too many bars. A carnivalesque, transgressive display of female pleasure and impropriety. In Laughing While Marauding, despite the emptiness of the train platform in what Halls has said is Zurich, birthplace of Dada, but also legible as anywhere in Mittel Europe, it’s easy to imagine commuters shying away from this group, as if the women are already sporting the traces of the abject aftermath of their night-to-be except instead of smeared lipstick and vomit on glittery party shoes, they are blood-spattered, brandishing trophies. Too loud, too screechy; out of control, behaving “badly,” taking up much more than their allotted space. Marauders with prop weapons – rifles, swords, guns – and animal masks… Fearless, stalking their prey, they have you in their sights.