Gallery > LAUGHING WHILE I 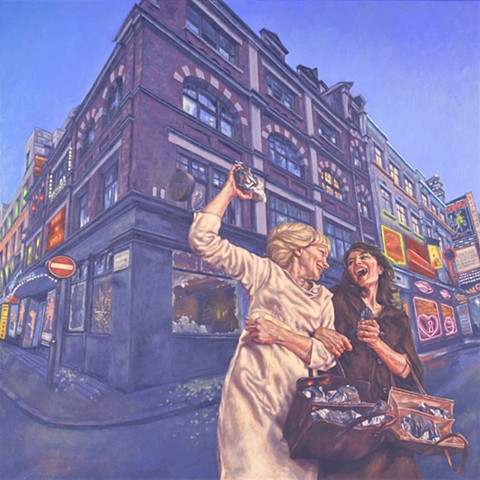 Laughing While Smashing will be exhibited among work by a group of renowned female artists & writers in Dear Christine (a tribute to Christine Keeler) conceived and curated by Fionn Wilson which will be touring the UK in 2019/20: Vane (Newcastle upon Tyne) May-June, 2019, Elysium Gallery (Swansea) Oct-Nov, 2019, Arthouse1 (London), Feb-March, 2020.

The two women in my painting, Laughing While Smashing (for Mandy and Christine) (2018), are not Christine Keeler and Mandy Rice-Davies, despite wearing as they do the approximate attire from the infamous court case. Rather, they are the refracted duplication of a cinematic representation of them, my models chosen for their vague resemblance to the actors Joanne Whalley and Bridget Fonda from the 1989 film, Scandal. They carry in their gaping handbags the repeated, distorted image of Keeler, wrapped loosely around rocks. Some of their missiles are no longer contained within their purses and are instead lying in a pile of broken glass or still lodged in the windows of number 16-18 Beak St, Soho, London, once Murray’s Cabaret Club where Keeler and Rice-Davies performed and first met, now one branch of a hamburger chain restaurant. This scene is not, then, one of Sixties’ reminiscences but is a contemporary street and the neon signs and illuminated doorways of old sleazy Soho seem to be squeezed out to the periphery by the darkened edifice of this new, faceless tenant. But it is only this building which has smashed windows and this counterfeit couple are running across the street, rocks in hand and preparing to take aim at multiple targets. And they are laughing. Acts of political resistance come in many forms and when I paint images of women laughing, eating, reclining, interacting or simply looking, I am always cognisant of the fact that the most seemingly innocuous actions can be subversive. The great French philosopher Hélène Cixous shows us this in her essay ‘Castration or Decapitation?’ (University of Chicago Press, 1981). As part of this radical text she tells the story of the Chinese general Sun Tse who decapitates a group of women he is trying to train as soldiers, so disconcerted, so disgusted is he by their persistent laughter and refusal to take his orders seriously. This resonates with me deeply. So, while I find the surveillance, judgement and exposure of Christine Keeler deeply troubling and compelling, I have also found her associate Mandy Rice-Davies’ resistance to shame in the face of such censure fascinating. In Laughing While Smashing (for Mandy and Christine), I fantasise that Keeler comes to survey her oppressors with a measure of Rice-Davies’ insouciance and that together they grant themselves some form of fitting, liberating revenge. In paint, at least, I can bestow them this.

Roxana Halls 2018 With a long-standing interest in theatre and performance, Halls chose her models for their ‘vague resemblance’ to the actresses Joanne Whalley and Bridget Fonda who played Christine Keeler and Mandy Rice-Davies respectively in the 1989 film Scandal. Their clothes are similar to those worn by the women during the infamous 1963 court case that would make the Profumo Affair the talk of Britain and result in Stephen Ward’s suicide. In the women’s handbags (open wide like this they echo the use of receptacles to symbolise female genitalia – everything from pots and frying pans in seventeenth century Dutch Golden Age painting to the ‘purse’ in Eric Fischl’s suburban psychodrama Bad Boy, 1981) we see what Halls describes as ‘the repeated, distorted image of Keeler, wrapped loosely around rocks.’ This reminds us how frequently Keeler appeared in print, mostly mis-represented, and that she was held responsible for the government’s collapse. The act of throwing rocks recalls the punishment destined for the adulterous woman of the Bible – a neat reversal as the adulterer was Profumo. Except Halls’ characters do not set down their stones in a show of mercy; quite the opposite. Whilst the painting does not depict Soho as it was in the 1960s, their target, the hamburger restaurant, is sited on what was once the infamous Murray’s Cabaret Club where, on a spotlit revolving stage which was cobbled together from car headlamps and tin cans, girls danced or held poses, half-naked. Keeler and Rice-Davies met at Murray’s, their friendship evolving from an initial dislike of one another. Halls gives us a much-needed image of female solidarity (images of female friendships in art aren’t as common as they should be) which in fact did not last in real life. Without nostalgia, she reminds us that their Soho has all but gone, as has the Soho of the late 1980s when the film was made. They are hinted at in the pulsing neon signs pushed to the edges of the frame. Their replacement is an altogether more soulless and gentrified place, making her women’s actions all the brasher. So Halls’ painting is a performance (by her models) of a performance (the film actresses’s) of what was in any case a performance (the real-life Keeler and Rice-Davies on the witness stand, primed by lawyers, tabloid journalists, and corrupt police). In the light of the #metoo movement and belated reports of the historic sexual grooming of girls in care homes, recent accounts of Keeler have stressed her youth, economically deprived upbringing, vulnerability and the swingeing way she was castigated in the press as a ‘shameless slut’ or ‘cold-blooded harlot,’ never recovering from it. She is now more likely to be perceived as a victim, despite her wish not to be seen that way. Mandy Rice-Davies may have avoided a lot of public approbation at the time by moving abroad but she was castigated too: for not spinning from one disaster to another like Keeler; for appearing to ‘sail through’ proceedings; for becoming rich and settled. Here, then, is the double transgression in Laughing While Smashing: the women are smashing the glass on the site of “their” old club on their way out, as a form of revenge against the establishment (in both senses of the word), but also smashing it – in contemporary parlance, making a success of it.