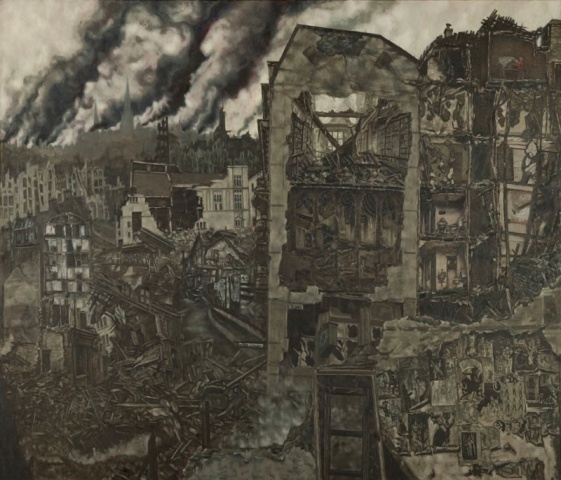 This painting seeks to depict one small action of hope amidst a landscape of smouldering devastation in the form of a lone figure laying a table in the uppermost corner of a ruined building, the only point of colour in a monochromatic panorama. The location of this dystopian city is an amalgam of many, some more immediately recognisable than others, from across time & continents, from Dresden to New York to London, with the intact spire of Coventry Cathedral rising majestically above them all. In the midst of the ruins is the large white structure of the 1930's south London theatre where I have my studio which was substantially damaged during the second world war but eventually repaired.

I painted this after a particularly debilitating depressive episode during which I was unsure if I would paint again. To break this lassitude I finally attempted to paint one tiny picture and discovered that it was only in the act of making work, however modest my intentions, that I would realise that my fears were unfounded. Shortly after this I began Laying The Table, with far less timid intentions.

Around the time I was in the process of painting this a sudden wave of enthusiasm for 1950s-esque vintage objets took hold, an aspiration to obtain the commodities which best evoke the ladylike world of an idealized polite culture. This occurred during a significant financial crisis and it seemed to me that part of the attraction of all these things is that they symbolize a kind of peace and security that seems elusive today, as if through the rituals of taking tea and making jellies the genteel life they allude to will be ours. The statement Keep Calm and Carry On, which was the working title for this piece, became at that time a somewhat ubiquitous and devalued sentiment, appearing, for example, on posters, tea-towels and mugs.

I've found myself thinking about this picture at intervals since then, in particular the woman who lays a table in the midst of ruination. Certainly when I've personally experienced a hiatus I have done so but rather more when in the public arena one person has, against all apparent futility, made their hopeful gesture of optimism and faith.