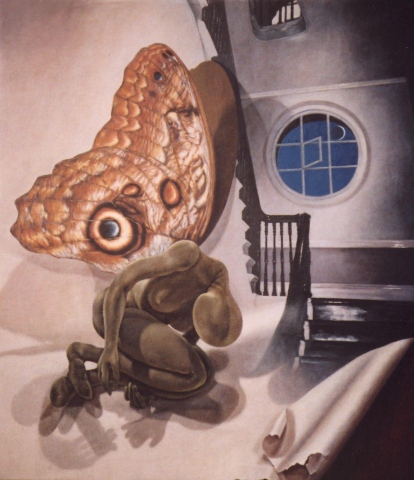 My painting, Metamorphosis, is not an image concerned with transformation as the work's title might suggest but rather with becoming that which you already are. The central figure of the piece is coiled in readiness at the foot of a stairwell, made from a turning page of paper which leads to a small open window, She bears upon her back the wings of what might appear at first glance at their somewhat drab colouring to be those of a moth but they belong in fact to the Owl Butterfly. These large and distinctive creatures are known for their huge eyespots which resemble the waxing moon as much as an owls' eyes. It is thought that these markings act as a form of camouflage, warding off predators by confusing them. Coming out as gay can be a protracted process which involves a measure of pain and sacrifice, despite being one of hopeful, irrepressible truth. But it is often elating and revelatory, an act of faith and honesty which is rarely regretted and never forgotten.